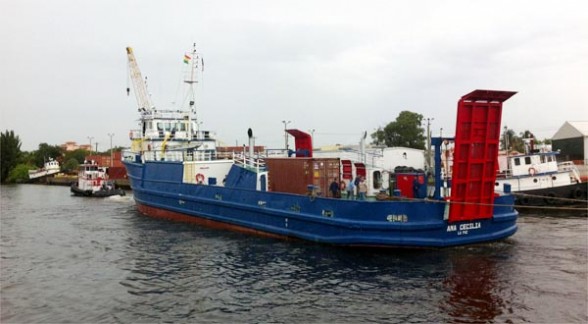 The ship Ana Cecilía is tugged through Miami’s port, where it will depart to Havana.

On July 13th, direct merchant shipments from Miami to Havana Harbor started up again after 50 years of a US-enforced embargo on trade between the U.S. and Cuba, according to a report in Businessweek.

The Ana Cecilia, a sleepy, blue-hulled ship that carries a maximum of 16 containers, is operated by the International Port Corporation. Making a 16 hour trip, the Ana Cecilia shipped cargo sent from religious and humanitarian groups, and delivered packages from family and friends in Miami to Cuba’s port, where Cubans observed. Most are not phased.

“I have been fishing off the Malecon for the past 12 years… I don’t think the appearance of a new flag on the waters of Havana Harbor is going to change my lifestyle,” Businessweek quoted Daniel Herbert, a fisherman, as saying.

The Miami side shares little anxiety as well. According to a report in Portafolio, a Colombian business news journal, there is a law that says a ship cannot leave from Havana and return to Miami until after 180 days. However, IPC’s Leonardo Sánchez Adega says that there is little reason to worry about any complications, explaining that IPC possesses all of the permits that are needed to enter and exit Cuban and American waters.